This article was originally published on December 13, 2019 at https://gritdaily.com/grit-daily-hosts-first-miami-art-summit-alongside-the-banana/

By now, you’ve no doubt heard about Art Basel. You haven’t? Surely you’ve seen images of a banana duct taped to a wall, the already iconic art that launched a thousand memes?

Celebrities such as Brooke Shields and brands including Perrier, Burger King and Popeyes have all spoofed the piece by Maurizio Catellan, an Italian absurdist artist. Catellan was previously recognized for his 18 karat gold toilet, titled “America,” which was featured at New York’s Guggenheim Museum in 2016, and reportedly used by more than 100,000 people before it was stolen from Blenheim Palace in Britain earlier this year.

Art Basel is celebrated as the world’s biggest and greatest art fair. Each year, it is held in Basel, Hong Kong and Miami. Art Basel has its origins in Basel, Switzerland, hence the name.

Back in June, 1970, three Swiss art professionals, including dealers, collectors and gallerists, united to create a contemporary art fair. Ernst Beyeler, Trudl Bruckner and Balz Hilt desired to compete with Art Cologne, which was launched in Cologne, Germany three years prior.

The art fair was an immediate hit with 90 galleries participating and more than 16,000 visitors. Art Basel expanded into Miami in 2002, then into Hong Kong in 2013.

Art Cologne, Art Basel and numerous new, independent and satellite events, such as Art Düsseldorf, are hosted each year. Entry to the curated fairs is highly competitive as they serve as a platform for galleries and artists to exhibit and sell their modern or contemporary art.

Extravagant over-the-top parties, master classes and live performances are hosted as part of the fairs to attract buyers.

Last week, December 5-8, 2019 in Miami, more than 200 galleries participated to showcase work by over 4,000 artists  ranging from children to prominent and established craftsmen.

Contemporary works exhibited include sculptures, paintings, photographs, films, videos, digital art and art installations. The latter represent an emerging category where multi-media are assembled for a temporal, space-specific display designed to transform the perception of that space, often provoking more questions than answers.

Most installations are concepted for an immersive experience, inviting visitors to engage with or walk through it as they contemplate its meaning.

“Art is whatever you can get away with.” Andy Warhol

Satellite events around Art Basel are a vibrant part of the scene. Co-hosted with JADA Art, Grit Daily’s co-founder, Jordan French, along with Steve Suthania, Chris Panagakis and Jennifer Matthews, hosted the Miami Art Summit. The team invited artists to interact, analyze and explain art and brands as the art fair’s first effort to ask the the real questions around expression and identity.

Topics covered included how brands can do art, the marriage of art and politics, street art fashion and the art of Instagram. Panelists and moderators dove head-first into the gritty side of art and business. Grit Daily News also welcomed celebrated portrait artist, Stephanie Agudelo, who infuses color into her work and awarded her with the honor, “Emerging Artist 2019.” 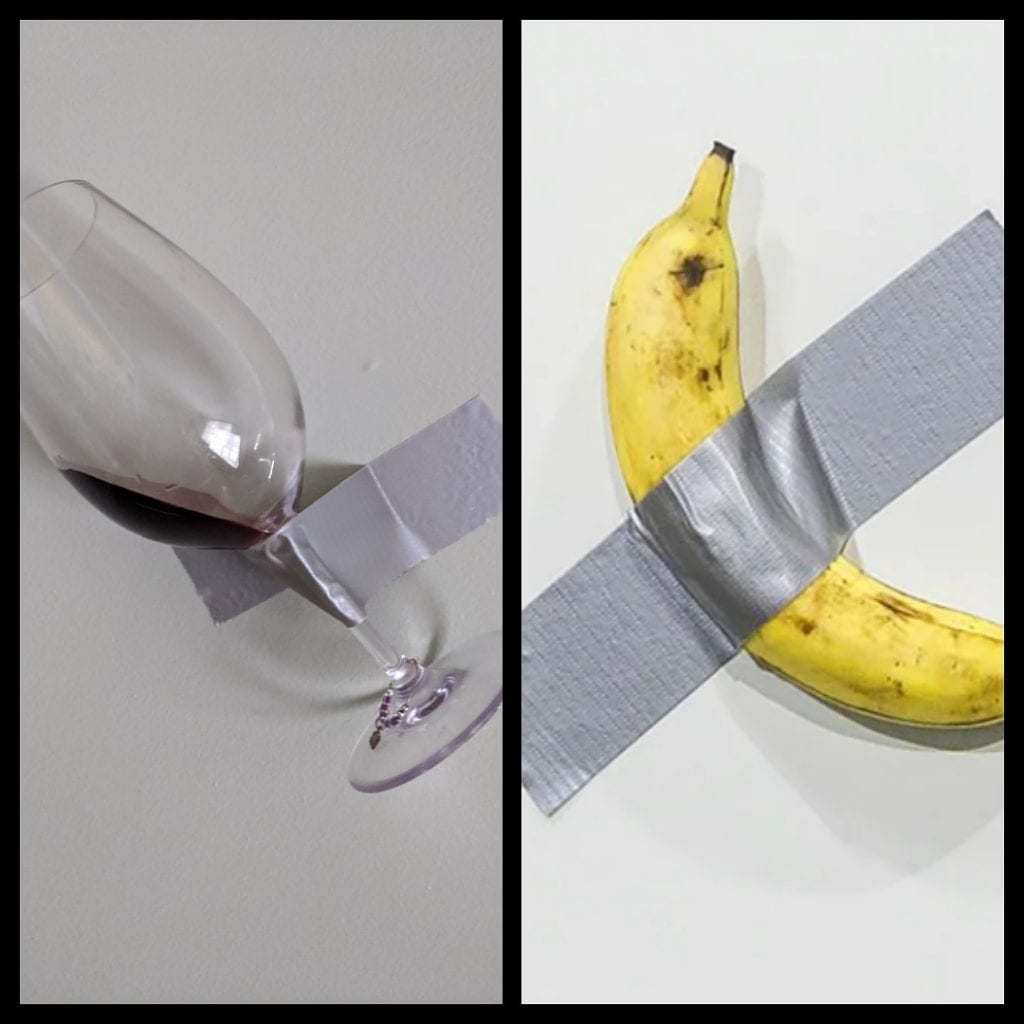 Although the banana stole the show, there was much, much, more to the art fair. Desigual, a Spanish clothing brand, featured a fashion show which evolved into performance art titled, “Beso,” or kiss.

Attendance was down from 2018 but sales were brisk at the 81,000 visitors made their way through more than 200 galleries. Several pieces sold in the low millions of dollars and current estimates suggest that the exhibited art collectively sold for more than $63 Million. One of the most popular themes was climate change which was showcased through art, activations and live performances on the eroding beach and a panel discussion on the denial of climate change.

A full summary of all the major highlights of the art event has been prepared by ArtNet News.

The duct tape banana has garnered global attention for many reasons, starting with how do you buy a piece of rotting fruit, why would you pay $120,000 for it and how can three collectors buy it? Let’s break it down. The art is titled “Comedian” as a vaudeville nod to the slap-stick humor popular a century ago when people would slip after stepping on the slimy peel. Apparently, Catellan has been concepting this piece of art for several years, bringing a banana with him on every trip and taping it to a wall. He experimented with resin and bronze forms but ultimately decided that a fresh banana was the most absurd representation.

Billy and Beatrice Cox, collectors in Miami, were the first to purchase the art, celebrating its “blatant absurdity” by paying $120,000 for the “Certificate of Ownership” which is a common practice for art installations where you buy the idea, not the piece itself.

The couple plans to gift it to a museum, requiring that it be replaced every other day, so that “…it would be accessible to the public forever, to fuel debate and provoke thoughts and emotion in a public space in perpetuity.”

A second collector purchased an additional certificate for $120,000 and a third collector paid $150,000 for the third and final certificate issued for the art. The duct tape banana had so many visitors that it created a security issue and the exhibition was closed.

But not before a performance artist, David Datuna, consumed the banana, stating that it “tasted like money.” He called his art, “Hungry Artist.”